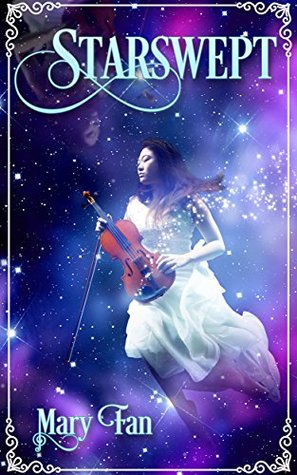 A century ago, an advanced race of telepathic humanoids made contact with Earth. Now, fifteen-year-old violist Iris Lei considers herself lucky to live on the high-tech campus of Papilio, a prestigious performing arts school powered by their futuristic technology. Born penniless, Iris’s one shot at a better life is to attract an Adryil patron. But only the best get hired, and competition is fierce.

A sudden encounter with an Adryil boy who breaks into Papilio upends her world. Iris longs to learn about him and his faraway realm, but after the authorities capture him, the only evidence she has of his existence is the mysterious alien device he slipped to her.

When she starts hearing his voice in her head, she wonders if her world of backstabbing artists and pressure for perfection is driving her insane. As her connection to him grows stronger, she discovers that her visions of him are real—by way of telepathy—and soon finds herself lost in the kind of impossible love she depicts in her music.

But even as their bond deepens, Iris realizes that he’s hiding something from her—and it’s dangerous. Her quest for answers leads her past her sheltered world to a strange planet light years away, where she uncovers secrets about Earth’s alien allies and the artist trade that shatter everything she knows.

Iris Fei attends the prestigious performing arts academy Papilio, where she’s perfecting her viola playing in order to attract a rich patron to take her into their employ. One day, Iris crosses paths with an infiltrator in the school – an Adryil boy, member of the telepathic humanoid race that made contact with Earth a century prior. He slips her a foreign device with which, Iris later learns, he is able to communicate with her telepathically. But this boy holds many secrets and no matter how close he and Iris become, he will not share them. Iris is determined to learn the truth, but it might be more dangerous than she ever thought.

This book intrigued me with it’s sparkling cover, beautiful title and promising synopsis. I went in fully expecting to love it. Unfortunately, that was not the case. I did enjoy Starswept to a certain extent, but I also had some major problems with it.

My main issue is with the writing. It felt very stiff and did a lot more telling than actual showing. Because of that I often felt too detached from the situation and could not feel for the characters. Another thing is the pacing, which was both too slow and too fast at the same time. It was inconsistent at best. The first half drags on forever, offering little action and not much relevance to the overall plot. The second half picks up the pace and does engage you more, but after 150+ pages of nothing it’s hard to start feeling something.

Additionally, I personally felt like this could have been split into two books. As grating as the pace was, it also moved way too fast when it came to character relationships and conflict. Splitting the story would have allowed for more development and depth. There’s quite a lot happening in Starswept’s world that half a book just wasn’t enough time to convey the main plot points.

Speaking of main plot points, the romance was too insta-lovey for me to really get behind. I just found it hard to believe the depth of their emotions when they’ve only just met. Feelings developed way too fast for my taste – I prefer my pairings sprinkled with a lot of slow burn.

I did like the most of the characters, however. Iris is incredibly naïve, especially at first, but it was nice to read about somebody who didn’t always have the answers. Given her circumstances and her upbringing, Iris handles herself and her changing stressful environment as well as anyone would. Out of the supporting characters I liked Cara the most, I wish we’d gotten more of her.

Overall, Starswept is by no means a bad book, just not the one for me. I liked the premise and the world and the lore, as well as some of the characters, but that’s about it. I’d still recommend it to anyone who likes space romance and doesn’t mind slower paces stories.