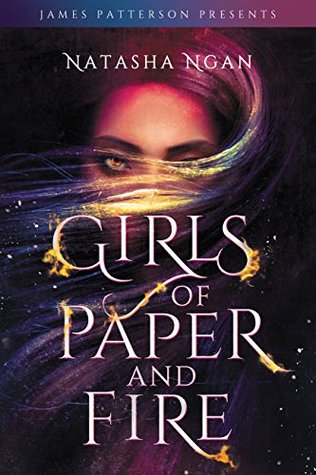 ❝Each year, eight beautiful girls are chosen as Paper Girls to serve the king. It’s the highest honor they could hope for…and the most demeaning. This year, there’s a ninth. And instead of paper, she’s made of fire.

In this richly developed fantasy, Lei is a member of the Paper caste, the lowest and most persecuted class of people in Ikhara. She lives in a remote village with her father, where the decade-old trauma of watching her mother snatched by royal guards for an unknown fate still haunts her. Now, the guards are back and this time it’s Lei they’re after — the girl with the golden eyes whose rumored beauty has piqued the king’s interest.

Over weeks of training in the opulent but oppressive palace, Lei and eight other girls learns the skills and charm that befit a king’s consort. There, she does the unthinkable — she falls in love. Her forbidden romance becomes enmeshed with an explosive plot that threatens her world’s entire way of life. Lei, still the wide-eyed country girl at heart, must decide how far she’s willing to go for justice and revenge.❞

greetings gals and gays, welcome to one of the best reads i’ve had this year.

girls of paper and fire has been a highly anticipated book of mine for months. i was over the moon when i got approved for an early copy of it and immediately dived in, and despite having little to no time to read because of uni, i managed to finish it within two weeks (a perfectly reasonable time, imo, and indeed quite fast for a student in a reading slump during term time!) quite honestly, i surprised myself with exactly how much i enjoyed it, it was that good.

let’s start off with the basics. lei is paper caste that works in her father’s herb shop in a small, remote town in ikhara. as part of the paper caste, which is the name given to humans, she is one of the least respected members of society, and she and her father have to struggle to make a living for themselves as a result. one day, soldiers come and raid her home, taking her away to become one of this year’s paper girls for ikhara’s demon king to take to bed every night. in the palace, lei faces immeasurable challenges in the face of etiquette, discrimination, and worst of all – the king, himself. but then, she does the unthinkable – she falls in love (with a fellow paper girl, no less). that leads to her involvement in a convoluted plot that would require facing even harder challenges and even a few sacrifices.

the way this story is written is mesmerizing, let me tell you; the words just glide off the page and into your mind like melted honey. not only that, but natasha ngan manages to sound eloquent even with a protagonist that comes from a remote village (and it’s believable!) every sentence was beautifully thought-out and you can see the work that went into writing the novel. i did notice a bit of a drag with the pace, but that might have been more due to my own sluggish reading process. i particularly enjoyed the world building and the lore – the caste system is very well executed and explained contextually without feeding information to the reader. not only that, but the world itself was masterfully done that ikhara came to life in front of me.

a highlight that i absolutely have to mention is lei and her development as a character. she starts out as a bystander in her own story, reluctantly pulled into the action, but she grows so much throughout the novel that she learns how to fill her own shoes, if that makes sense. not to be cliche, but there’s a fire burning inside her and i loved how she began to embrace it. it’s been a while since i’ve seen such a determined character with a believable motive, not just for the sake of being a “strong female character”. which lei absolutely is, but not in any stereotypical kind of way. she’s strong – a fact that can be backed up.

speaking of strength, let me tell you how happy it made me that romance was used to build the characters up instead of having it be an obstacle for them to overcome. it was such a natural thing, it felt so organic. and neither lei, nor wren’s character were lessened by it – on the contrary, it’s one of the things that help them flourish. love is a source of strength for them, and it’s shown beautifully in the text. another thing i really liked was the normalcy of them falling in love; the novel embraces it and lets the relationship go on a natural course instead of having either girl question themselves or their feelings. it’s a wonderful thing to see, especially in a world where f/f relationships are over-complicated and dramatized, and almost always over-sexualized, which is not the case with girls of paper and fire.

the demon king can choke. that’s it, that’s the entire paragraph.

near the end i did have some concerns about lei’s motivations and feelings, as well as the pacing, but it all wrapped up together very neatly with ngan addressing my exact criticisms (if you can even call them that), making them disappear essentially. by the last page i had gotten what i needed, characterization wise, and was feeling more than content with how things were handled. and then that ending happened. ms ngan, call me, i have some complaints.

overall, there’s not much left to say other than i loved girls of paper and fire. it’s not something we’ve seen in the ya community, and quite frankly i can’t wait to see more of it. kudos to natasha ngan, because this is the lesbian novel that we’ve been waiting for.

are you excited to pick gopaf up? or, if you’ve already read it, what did you think of it? let’s discuss!

2 thoughts on “girls of paper and fire by natasha ngan; a review”